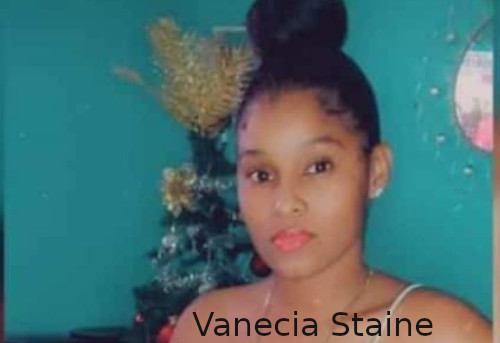 She was rushed to the K.H.M.H and died as a result of multiple stab wounds. The circumstances of the incident has not been officially released at the time of this news posting.

This is a developing story and News Flash on Channel1Belize.com

The live video feed of the ‘Commission of Inquiry’ which began this morning was abruptly disconnected as the opening session was preempted by a speech by NTUCB President Luke Martinez, who is 1 of the 3 appointed co-chairmen of the commission.

His speech criticized the government for the way some government/public assets are being sold off by the government, in the same manner done by the previous administration, in what Mr. Luke Martinez says are ‘Fire-Sale’ cheap prices. He was speaking for approximately 4 minutes. when the disconnect happened and screens went black.

One of the persons that was to give testimony at this mornings session was suppose to be former minister Anthony ‘Boots’ Martinez. He did not give any testimony since the session had prematurely ended.

During a press conference after the commission ended todays session the chairman of the commission Attorney Andrew Marshaleck told the media that as many as 10 persons were to give testimony today.

On January 26th. 2021 Prime Minister John Briceno appointed the 3 member commission to “investigate the sale of Government assets between the period October 2019 to November 2020.”

The main question that many have asked, including some media houses: is ‘WHO DISCONNECTED THE LIVE FEED’.

Technical telecommunications experts in the country have said that it could only have occurred (either) at the site of the hearing where the cameras were recording and encoding the session, or at a telecommunication equipment room where the feed was transmitted through; and up to YouTube and Facebook streaming servers. 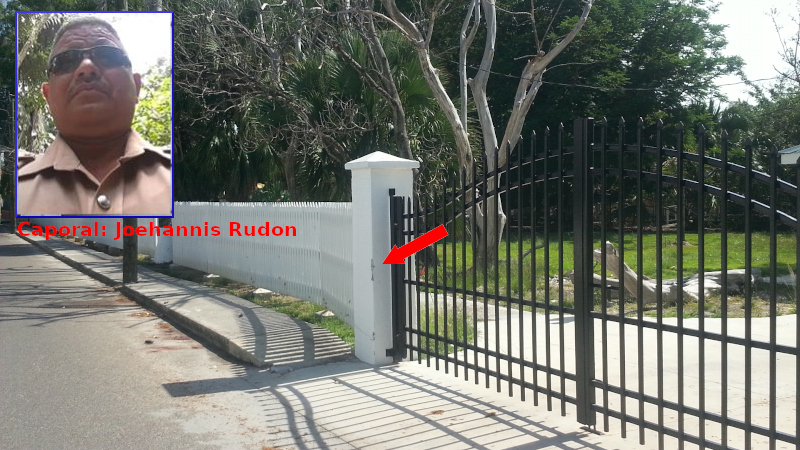 A policeman has died after crashing into the fence at the ‘House of Culture’ in Belize City.

According to security personnel at the House of Culture, the accident happened sometime between 11pm and 12 midnight (Sunday April 11th.) . The policeman has been identified as 49 year old Corporal Joehannis Rudon,.

He turned the corner at Saint Johns Cathedral onto Regent Street and lost control of the motorcycle and crashed into the cement post at the main gate.

The Belize Police Dept. have said that he was not on duty at the time of the accident, 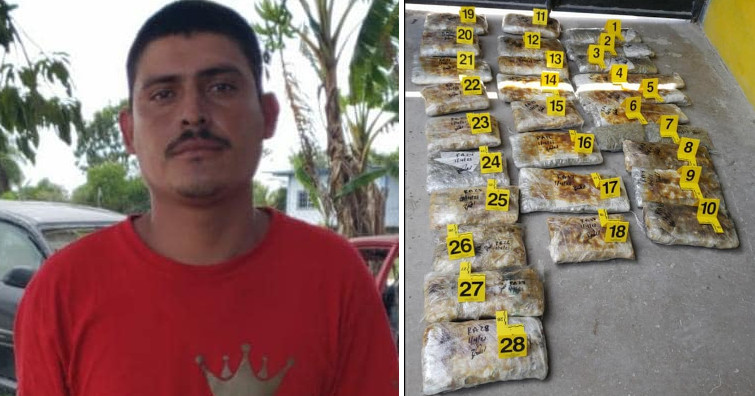 A Mechanic from Lords Bank created an ingenious hiding place to transport drugs, by creating a custom additional compartment that was only a few inches high, but could transport many flattened parcels of weed / drugs.

This morning (April 1st.) Jorge Burgos was stopped at the check point at the bridge at Tower Hill in Orange Walk on the Philip Goldson Hwy.

After a search of the vehicle, police discovered a hidden compartment (see photo) built under the pan of the pick-up truck that had several parcels of weed, weighing a total of 38 pounds. Burgos was arrested and charged with (possession of controlled drugs with intent to supply).

A stash of several bricks of packed cocaine worth (street value) $400USD , was found in a pick-up truck belonging to a farmer in the village of Libertad, Corozal District. The farmer has been identified as Estuardo Rodriguez 33 of Libertad.

This morning (Tuesday, March 16th.) Police descended on the farm to search for drugs with the assistance of the K9 unit. A total of 13 parcels of compressed cocaine were found in compartments of the vehicle., weighing almost 30 pounds. Rodriguez has been charged with the offense of Possession of Controlled Drugs with Intent to supply.

Users of various email accounts such as OUTLOOK and others that are associated with Microsoft should be on the alert for a very well disguised phishing scam that is attempting to get information about your email account.

An email arrives in your inbox that appears to be from MICROSOFT, with Microsoft Logo and a return address that ends in .msn, The email states that your account will be deactivated if you do not verify your account within 24 hours. In the email is a button that says VERIFY, when you click on the button it goes to a website that ends in .so, – dot-so is the domain prefix for the country of Somalia.

The testimony at the March 10th. hearing of the ‘Commission Of Inquiry’ came from as many as 5 persons. Most notable and damming was the testimony of Alfred Cal, who is a Sr. Lands Information Officer in the ministry of Natural Resources.

During that testimony it was revealed that Zhou Rong Li, also known as Kelvin Li was able to acquire 36 separate parcels of land in 2019-2020 from the Ministry, 23 of which are in San Pedro, Ambergris Caye. Documents presented by Mr. Cal also indicate that a parcel of land that was purchased in 2020 from the government for $2,000Bz$ has since been sold for $70,000Bz.$ earlier this year.

On one occasion Mr. Li received all his applications ( for 11 separate parcels) for land titles completed on the same day. Based on the evidence presented at the hearing it was concluded that someone within the Ministry of Natural Resource was aiding Mr. Li, that person has turned out to be (Corozal North Area Representative), former Minister of Natural Resources Hugo Patt.

According to records within the ministry, most applications for land titles normally takes 2-3 months to be processed.

In a shell-scheme that involved Juvencio Peter Herrera – a maintenance workman for Ivan Leiva, who owns an apartment building in Belmopan, the former Minister of Natural Resources Hugo Patt rented an apartment at the complex and met workman Herrera, who then borrowed $65,000.00 from Mr. Kelvin Li, – Herrera then lent that money to Hugo Patt to purchase a 2020 Toyota Tacoma.

The Ministry of Health & Wellness of Belize has confirmed that a new variant of the COVID-19 Virus entered Belize on January 12 VIA a member of the British Armed Forces (BATSUB).

According to the data currently available, the swab samples were sent to Baylor College in Houston, TX. where it was discovered to be a variant of the virus, which is technically known as U.K. Variant B.1.1.7 lineage or strain 20I/501Y.V1

The governments press release said
“As a part of the MOHW and BATSUB entry protocol, all troops entering Belize must bring in a negative PCR test within 72 hours of arrival. One hundred percent of the training troops must also undergo a mandatory re-swabbing with PCR on the first day after arrival.

Exercise troops must remain in complete quarantine until results are received. This process was precisely followed for the above case. The individual was isolated immediately and remained in isolation for 11 days. He was retested which yielded a negative result. At that time, he joined his battalion to continue with jungle training”.

Homeless man is shot- Charged with aggravated assault upon cop who shot him- Harold Garbutt, a police officer!

An unprovoked chopping incident left one man hospitalized on Valentine Weekend and a police officer who came under attack responding to the first chopping incident was lucky to escape injury with only an attempt to harm him by one homeless man.

According to police, on Saturday, February 13, 2021 at around 4:00 p.m., police responded to reports of a chopping incident on Marine Parade Boulevard and found one man injured as they too came under attack and was lucky to escape injury.

22-year-old Akeem Patterson was seen with a cut wound to his head and in a report to police said he was attacked by a homeless man later identify as Francis Ramos of a no fix address in Belize City.

Police say that the homeless man who earlier had inflicted chop wound to Patterson assaulted the police when he attacked him with a machete and as a result, the officer in self-defense fired a shot which caught him in his leg.

The homeless man who has been identify as 47-Francis Ramos, a Belizean has been hospitalized for the last nine days at the KHMH. Today he was released into police custody and was arraigned in the Belize City Magistrate’s court on a single charge of aggravated assault with a machete upon Harold Garbutt, (A police constable).

Ramos who claim he is homeless with a no fix address appeared before Senior Magistrate, Stephanie Gillett in Court #4 where he pleaded not guilty to the charge and was offered bail in the sum of $2,000 plus one surety which the magistrate order, his surety must be a Belizean surety.

But Ramos was unable to meet bail by the close of today’s office hours and he was remanded into custody at the Belize Central Prison until April 22, 2021.

Today in court, Ramos was not levy any charges yet in connection with the incident involving Akeem Patterson who was injured.

It appears Patterson has not yet requested court action in the matter hence why no charges yet at this time.

“Francis Ramos, 47, is still yet to be charge for the chopping of Akeem Augustine”

25-year-old Calbert Eugene Humes is remanded to jail after arraign on a single charge of abetment to commit murder!

“Former May Flower Street resident is accused of facilitating Kareem Kelly who they say tried to kill notorious figure, Jervis Diamonds/Valencia on January 26, 2021”

Three weeks ago, someone attempted to end the life of notorious criminal figure, Jervis Diamonds/ Valencia but even after being shot multiple times to the body, he lived to tell the tale and has since told police who tried to to kill him.

One of the men have since been identify as a relative, 21-year-old Kareem Kelly, his cousin of same street who resides just a few houses away from his home in that area .

Above: Calbert Eugene Humes is the first person to exit the police van.

Today police charge a second man, identified as another neighbor of the violent gang warfare area.

He has been identified as 25-year-old, Calbert Eugene Humes, a Fisherman and also a Construction Worker who claim he now lives in Hopkins Village but also once lived at #77 May Flower Street too.

Humes appeared unrepresented before Magistrate Stephanie Gillett in Court #4 this morning shortly after 11:00.

In court, a single charge of abetment to murder was read to him.

Allegations are that on January 26, 2021, he facilitated, 21-year-old Kareem Kelly to murder Jervis Diamonds/Valencia.

No plea was taken from him in court and Magistrate Gillett explained to him that due to the nature of the offense, she cannot grant him bail hence why he was remanded into custody at the Belize Central Prison until April 26, 2021.

On Monday, February 1, 2021, three weeks ago, Kareem Kelly, 21, a laborer of #5 May Flower Street who claim he is cousin to Diamonds/Valencia was arraign on a charge of attempt3d murder and remanded to prison.

Humes now joins Kelly at the Belize Central Prison until April 30, 2021 when both will appear in court together for first time.

Kareem Kelly was charged with three indictable criminal offenses of attempted murder, use of deadly means of harm and dangerous harm.

On Tuesday, January 26, 2021 sometime in the afternoon, a gunman open fire in the direction of the well-known criminal figure shooting him four times.

Valencia who was in the May Flower area also known as “Ghost Town” was hit as many as four times, once to the lower abdomen, the groin, and leg and another area of the body.

Diamond shooting is believe to be apart of an internal warfare in that gang controlled area.

Police say as Diamond/Valencia was sitting in a yard which is his home turf, when he was approached by five men, and one of them pulled out a gun and opened fire. Diamond Valencia – who has been shot before – then dashed through the alley but was shot to the the lower abdomen, the groin, and leg.