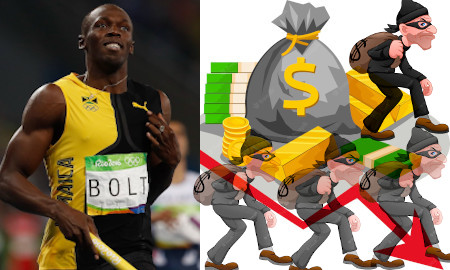 The word on the street and among financial technocrats is that
(a) Someone with complete access to Usain Bolt’s account made a very bad investment in some very risky-shark-tank type investment and lost all of Bolt’s money. . . .  or

(b) Someone, without proper authorization, was made to push an investment button in a very risky financial bet, of either stocks, derivatives, crypto, or an investment portfolio that comprised of very-high-risk components.

In most cases a wealth-manager would advise a client to not take high-risks, and especially the entire portfolio.

As mentioned in our previous article ‘Where is Usain Bolt’s Millions‘,  wealth management firms are just what it says, Wealth Management’  they are not a bank, and do not keep the physical cash in a vault, they keep it in a bank account in Jamaica or the U.S, and access is, or would normally be with (various levels of) consent of the client.

Which brings to memory a story I read many years ago, of how a government/finance minister in the Caribbean lost $5million USD overnight (in less than 24 hours)  in the extremely risky world of currency-derivatives.

That high-stakes trading didn’t work out the way his persuaders said it would, and the $5million USD vanished overnight.

The question then becomes, how much knowledge did Mr. Bolt have about, (a) When his money’s were being invested, and (b) How much approval did he give for those investment purchases.

Up to today, Thursday January 19th. 4pm. the word out of Kingston, Jamaica is that an investigation continues, but nobody has been arrested.

This would mean that the statement made by the Jamaican FSC director “we are investigating SSL’s exposure to . . . ” (is for you to read-the-tea-leaves) and realize that the 50 year old company ‘SSL’ which Bolt has been with for over ten years may not be the villain.

Late Thursday evening (January 19th.) information from Kingston is that the director of Jamaica’s FSC has resigned, and the operations of financial oversight in Jamaica is now spearheaded by Jamaica’s Central Bank (Bank of Jamaica).

Usain Bolt’s attorney ‘Linton P. Gordon’ has written a critical letter to the FSC and its lack of oversight, and critical of FSC’s enforcement of Jamaica’s investment laws. But no arrests has been made thus far.