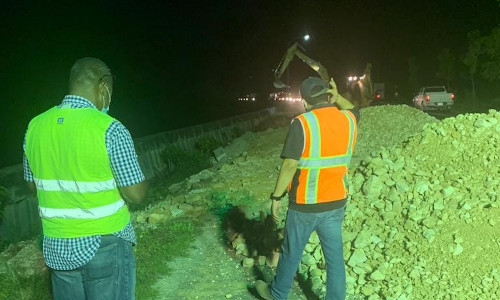 Sometime last night before 7pm. on Thursday December 23rd. a retaining wall near mile 7 on the Philip Goldson Hwy. collapsed because of under-currents of the Belize River.

The roadway then gradually fell into the river and reduced the eastbound lane towards Belize City. The Ministry of Infrastructure was on the scene shortly after and began to make plans to shore-up the roadway.

At approx. 7pm the following message/post was on the Ministry’s Facebook page.
“Motorists are asked to exercise extreme caution while driving on the Philip Goldson Highway near Mile 7. Personnel from the Ministry of Infrastructure Development and Housing are on the scene working to fix a section of road which has crumbled and poses a threat to traffic. We ask for patience as our team of engineers and operators deal with the situation.”