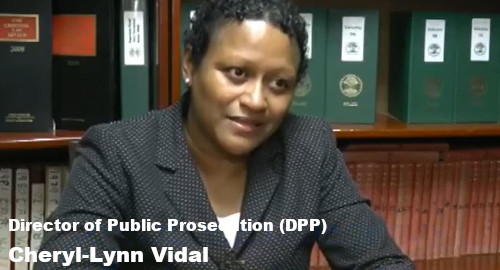 Today the ‘Director of Public Prosecution’ has made a public statement concerning the fact that her ‘bodyguard / driver’ who is a policeman was involved in the drug plane Landing’.
The following is the ‘Press Release’

On Friday 5th November 2021, I was informed by the Commissioner of Police that Cpl Delwin Casimiro had been detained on suspicion of having committed a drug trafficking offence. He has since been charged, arraigned and remanded.

Cpl Casimiro was assigned as my security detail in 2019, but I have known him since 2012 when he was a member of the Gang Suppression Unit. He continued to engage in operations with the Commander Operations Strike Team after he was assigned to me, until November 2020, when I requested that he refrain from participating in operations, due to covid-19 considerations.

Nothing in my interaction with and observations of him over the years could have alerted me or served as a warning sign that he could have been engaged in any criminal activity.

Three of the other officers who have been charged along with him are members of the Operations Team and persons with whom he had been working for years. That is what I know of his connection with them. As regards any connection between ACP Marco Vidal and me, we separated over a year ago and there is no communication between us.

I am aware of the many comments posted on social media attempting to link me to the actions of my former security officer. This has deeply saddened me because I have dedicated almost my entire 23-year career to the criminal justice system, mostly as a Prosecutor. I have endured years of public criticism for unpopular decisions I have taken as DPP, decisions that were, in my view, sound in the law, and grounded in ethics and the proper application of criminal justice principles. I have sought, at all times, to anchor my tenure with diligence, fairness and professionalism.

The current comments being made about me are thus very hurtful. They are scurrilous and utterly untrue. They are also potentially damaging to public confidence in the criminal justice system if left unanswered. It is, most of all, this latter consideration that has impelled me to make this statement. I therefore reiterate: I had no knowledge or suspicion of, and no involvement in, the events of last Friday.

Nevertheless, the Office of the DPP will not participate in the investigation or prosecution of this matter at any stage. I am confident that the Commissioner of Police will spare no effort to bring all offenders to justice.

I hope that the gravity and impact of the actions of these officers is not lost on them – the terrible betrayal of the trust that was reposed in them; the shadows unfairly cast on the careers of others who believed in them and looked after their welfare; doubt in the criminal justice system; and the embarrassment that they have caused to their colleagues, the Department and to the country as a whole.