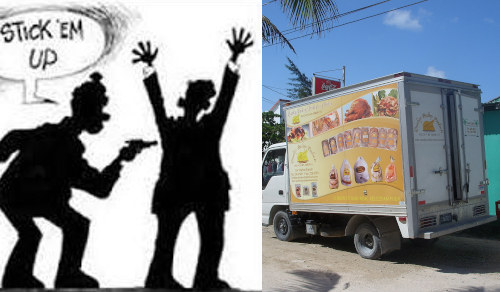 On Thursday a Caribbean Chicken delivery truck was robbed at gun-point in Belmopan by 2 armed robbers.

Fearing for his life, the driver who was seated in the passenger seat, as the robbers drove his truck, he jumped out of the speeding truck like a stuntman, and called for help!.

The police were notified and dispatched to chase the truck, but by that time the robbers had already ditched the truck and ran away. The side-man was rescued from the freezer by police. Several hundred dollars was stolen from the days sales.

Police have detained one suspect and are looking for another.