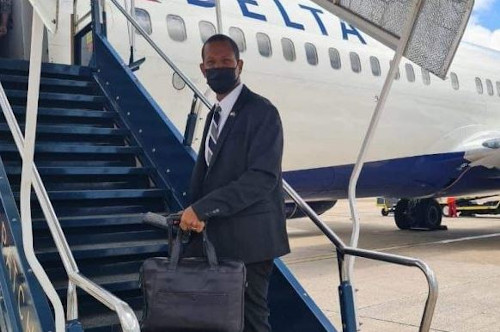 On Sunday (Aug. 15th.) Jamal ‘Shyne’ Moses Barrow, leader of the opposition in the House of Representatives departed Belize for an Official-Un-Official trip to the United States.

The news was accompanied with a shiny PR photo of ‘Shyne’ boarding a plane, and the information released claimed that he will be meeting with ‘State Senators’ and members of U.S Congress to discuss ‘mysteries of the deep-blue sea’.

The notion of a member of the non-governing side of the country’s opposition party meeting with members of the U.S government for undisclosed reasons sparks much conversation with Belizeans as they try to determine facts from rumors. Rumor has it that the LoOPP is probably wanting to collect a small sum of music-royalty money that may be held in a U.S bank. Which he is entitled to after 10 years has passed since being deported from the U.S;

We Belizeans have for many years accepted the shady moves of some politicians who are really just trying to impress some Belizeans who may believe that the young chap is really doing valid business or official consultation with large foreign powers.

NOT ANY MORE. Belize is no longer a pool of fools. The consultation with other nations is done by the ‘Ministry of Foreign Affairs’.

Sorry, Mr. Shiny, this seems to be just another stunt to garner opinions that you are in consultation with large foreign powers, which is very impressive on the surface.
But official consultations with other governments can only be done ‘Legally‘ by a ruling government. Which, bye-the-way, cannot stop anyone from releasing a photo and making claims.

And if you manage to snag a photo with a U.S Government official, in Congress or a State Senator. Psssst, that is done everyday by visitors to the Congress visitors que and at the U.S Rotunda.

It would be so nice if there was more effort made for the people of the Mesopotamia constituency, . . The flooded streets after a little rain and or the young men and young women that struggle with crime and basic necessities.