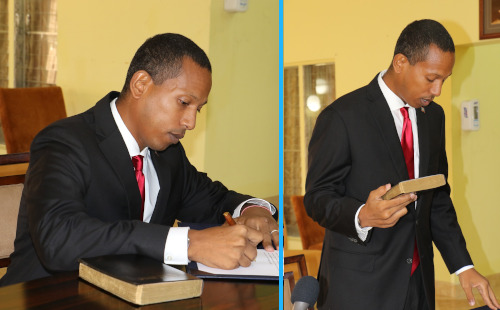 7 months after becoming the area representative for the Mesopotamia constituency in Belize City, the new-comer to politics -Moses Jamal ‘Shyne’ Barrow – was sworn in as the new ‘Leader of The Opposition’ in the House of Representatives for the 5 members that represent the United Democratic Party (UDP).

The occasion punctuates a week of turmoil for the UDP after a letter to the Governor General indicated that the former leader of opposition ‘Patrick J Faber’ did not have the support of the members of the opposition in the House Of Representatives.

After the swearing in ceremony ‘Shyne’ spoke to the press pool outside ‘Belize House’ and said the developments of the past few day were not about him, but bigger than himself.

‘Shyne’ has had many names, one of which was ‘Moshe Levi Ben David’; was the name he acquired after he converted to Judaism. he told the BBC in 2010.

‘Shyne’ is also known to some people as ‘Moses Jamal Barrow’ and ‘Moses Michael Levi Barrow’. – For the sake of properness we researched his name given at birth ( Belizean Christening ) , which is Jamal Michael Barrow born November 8th. 1978.

Shyne’s foray into politics and or government duties started back in 2010 when his father, former prime minister Dean Barrow appointed him as the ‘Music Ambassador’ for Belize.

His first attempt at political office was November 2020 after the former area representative Michael Finnigan retired from politics.

The former rapper is also the area representative for the Mesopotamia constituency and as such he could be instrumental in making young Belizean men aspire to a more productive lifestyle.