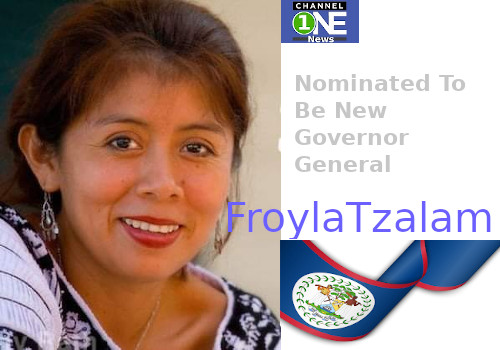 The Briceno Administration has nominated Froyla Tzalam to be the next Governor General of Belize.

Ms. Froyla Tzalam is the Executive Director of SATIM, She is a Mopan Maya from San Antonio, Toledo. She has a first degree in Anthropology and a Masters in Rural Development.

“She believes that all people must know their history in order to promote and protect their identity and culture”. The nomination is submitted to the Queen of England office of foreign affairs for approval.

Based on past government nominations it is customary to nominate only 1 person so as not to create a competitive atmosphere with the nomination selection process.

Some people in the Caribbean consider the post to be mostly ceremonial and an old ‘British Colonial Relic’ of past government structure. However, as was evident in the passing of recent ‘Statutory Instruments’ for COVID-19, the Governor General does play a key role in the procedural process of the enactment of new Laws, Regulations, Foreign Relations and, most recently, the ceremony of the installation of a new Prime Minister.